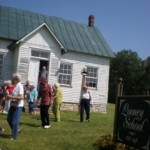 Between the “Great Road” of the Shenandoah Valley and the

mountains of what would soon be West Virginia, Indians traveled

looking for game and pioneers from Europe and Britain began to

settle.  An outpost called “Craig’s Camp” was established and visited

by Col. George Washington in 1756 as he toured the frontier.

Farmers and tradesmen continued to settle the valley where Johns

counties.  New Castle remains the only incorporated town in the county, with a

historic district that includes the Jeffersonian-style courthouse and nearby Old

When Virginia joined the Confederate States of America in 1861, a large percentage

of Craig County men and boys left home to fight in the War Between the States.  In

June of 1864, Union troops commanded by Gen. David Hunter passed through the

county searching for food, and tried to set fire to the courthouse where early

records were dragged into the courtyard and destroyed.

In the 1880’s, iron ore was discovered, railroads were laid and turnpikes improved

to provide transportation for the ore.  In the area now called Fenwick Mines

Iron Company with 300 residents.  The town had a white church, a black church,

equipment for ore processing, a hospital, school, playhouse and a large mule barn.

In 1910  70 immigrants from Italy arrived and moved into the town. The area

numerous small mines.   There is no record of what became of the almost all male

immigrants when the mine closed.

The town of Fenwick Mines was effectively erased when the mine closed. Buildings

were moved or used for lumber.  Machinery was scrapped.   Rails from the railroad

Branch.  This also served to transport ore from Barbours Creek mine.  Ore was

shipped to furnaces at Clifton Forge or perhaps Quinnamont WV.   This railroad

for county residents. As a result,  new roads, telephone lines and fire towers were

built throughout the county.

lives.  The patriotism of area residents is seen in VFW Post 4991, the UDC which was