Craig County is located in the the western portion of the Commonwealth of Virginia, north of the City of Roanoke and the Roanoke Urbanized Area. Craig County is part of the Roanoke Metropolitan Statistical Area. New Castle is the county seat and the only town in the county.

The county is a province of ridge and valley in geological terms.  Creeks run down the valleys and provide water source for livestock operations.  The continental divide zigzags through the county separating the drainages of the New River  (ending up in the Mississippi river) and the Atlantic ocean. 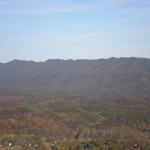 Nearly two thirds of the county is the George Washington  & Jefferson National Forest.  The Appalachian Trail crosses through the county west to east, and turns north. The county also contains the  Niday State Forest.  Rural in nature, it has no stop lights and is crisscrossed by Route 42 running northeast to southwest, and Route 311 running approximately east-west.

Road maps with 911 street names and visitor information are available from the public library (Rt 311 and Main St).  They were produced by the Craig County Tourism Commission with assistance from Roanoke Valley Alleghany Regional Commission and Target Marketing, LLC.  Please note that Google does not “know” all of the county road names,  and only lists county route numbers for a large part of the county.