Paint Bank is an unincorporated community in northern Craig County.  It is located at the intersection of State Route 18 and State Route 311 northwest of the town of New Castle, the county seat.  The village is located between Potts Mountain and Peters Mountain.

Paint Bank got its name from the iron ochre and red clay taken from the banks of Potts Creek that was used by Native Americans, notably the Cherokees, as war paint, and to make their pottery with a distinctive red color.   Reportedly settled by permanent settlers in the 18th century, during the early days of the 19th century, the same red clay was later made into a commercial paint and red bricks for permanent buildings. A number of land grants were made by Lord Fairfax and the Commonwealth of Virginia, especially by the later around Paint Bank in the 1820s through the 1850s.

Colonel William Preston (Virginia) established a grist mill for corn and wheat in Paint Bank. “The grist mill sits on Potts Creek, on property originally owned by Revolutionary War hero Colonel William Preston. Colonel Preston was given the land grants in 1780 for his service in the war.” Through the years since the American Revolution, ownership of the mill changed several times, and eventually became known as “Tingler’s Mill”.

Although the Tingler’s Mill building today only dates to 1873, the mill site has been in Botetourt County, where it was originally established in 1783. Then the land became part of Monroe County, Virginia in 1851. Then Craig County was formed in 1863 when West Virginia became a state, then was returned to Virginia. “Because of Civil War boundary changes, the mill has been in two different states and five different counties without ever having been moved.”  The mill site is now part of the Paint Bank General Store complex and open for tours.

Iron ore and manganese were mined in the area during the 19th and early 20th centuries by the Virginia Iron, Coal & Coke Company.

During World War I, some further investigations were made in the region for strategic minerals needed for the war.  Again during World War II, the Strategic Minerals Investigations team of the United States Geological Survey promoted the mining of manganese as a strategic mineral. Sandstones and cherty sandstones of the Helderberg group are impregnated with manganese oxides, and they are exposed by a cut in the road 2 miles southwest of Paint Bank on the floor of Potts Creek.

At the beginning of the 20th century, the local branch of the Potts Valley Branch line of the Norfolk & Western Railway came into Paint Bank. The Train Depot dates from 1909, and the Section Foreman’s Cottage dates from 1910. (They are now part of the lodging options available for visitors to the area.) During this period, daily trains carried out the ore and lumber, and brought in passengers and goods.   Paint Bank was the center of a mining and timber boom in the early 1900s, when over 2,000 people lived around Potts Creek. The trains turned around at the terminus of a dead end run at Paint Bank.

Originally, the Big Stony Railway was extended from the Norfolk and Western Railroad tracks at Ripplemead in 1896. The track followed the Big Stony Creek along an easy grade to reach the timber stands in the mountains. In 1909 the tracks were extended 27 miles to Paint Bank, and renamed “The Potts Valley Branch”, the “Virginia and Potts Creek Railroad” or the “Punkin Vine.” The tracks were removed during the 1930s after the Depression.

Potts Creek, originally called “Carpenter Creek“, runs through the village. The name was originally applied to a land grant of over 700 acres dating from 1750 to John Carpenter, which was located near present day Covington, Virginia. The Paint Bank Virginia Fish Hatchery run by the Virginia Department of Game and Inland Fisheries is located in Paint Bank, and the trout that are raised there are released locally. Brown trout, Brook trout and Rainbow trout are raised there. The trout are released when they are about 18 months old, and are used to stock streams in nine counties. “This state fish hatchery, just south of Paint Bank, provides a unique look into the trout rearing and stocking process. Numerous concrete tanks hold up to 1.6 million trout in all stages of development, thus providing an easy viewing experience. Around the fish hatchery is a variety of wildlife. The creek that runs along the edge of the property should be checked for butterflies, birds and at dusk some white-tailed deer. 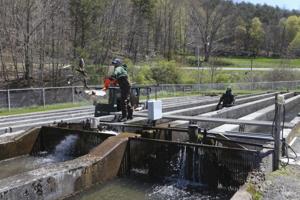 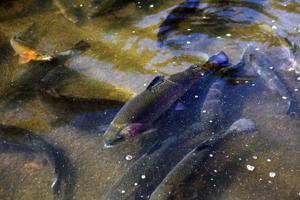